Bedside Bookcase Before And After

After my epic nightstand refinish, the other side of my bed was looking shabby. I was never completely satisfied with the bookcase I put there. It was a stackable foldable one...and I wish when I'd bought them back, oh, <GULP>, 8 years ago in 2000, I had bought 4. I bought 3, and this third straggler has always been an outsider. So, I used it bedside as a table/printer stand. However, it was pretty ugly. I didn't like how the sides extended up past the sides of the bed. I didn't like seeing the clutter on the shelves. I had been looking at other nightstands, but didn't want to spend a ton of money (especially after my big bargain on the other side). Plus, the bookcase was functional, just not pretty. So, I decided to cover it. I was inspired by this photo in the February issue of Domino: So, I began my undertaking. I enlsited the help of my dad to chop off the top sides. Power tools are AWESOME. He also dug into his stock of random wood for a piece of plywood and cut it to fit the size I needed. The shelf was somewhat deeper than the original so that my cover would fall and cover the printer. (I should also mention that my brother also helped out with this part of the endeavor...and my whole family had been sick, so I appreciate the work!).

My mom and I shopped at Joann for fabric and the rest of the materials. I limited myself to the fabrics they had in stock because nothing kills me like too much choice. Even with those limitations, I was there a LONG time deciding. I narrowed it to a black and white print and a grey solid velvet. The black and white won out because there wasn't enough of the velvet.

Now, I wasn't going to actually make a slipcover. That was too complicated. I decided to upholster the top and then make side panels to velcro to it. Cutting the pieces was infinitely easier for this project because I invested in a rotary cutter and mat. I never thought I needed one, but read in a blog about its ease of use and decided to try. I'm really glad I bought one. It was a relatively small investment because they were on sale with an additional coupon (never pay full price!) and made cutting so much easier.

So, I upholstered the top shelf with some batting, the material, and one of the best inventions known to man: the staple gun.

I pinned and pressed the hems and sewed them with my seldom-used machine. The first panel (front) was perfect. The pattern matched up, the hems were straight. The second and third, not so much. I don't know if I calculated the cutting wrong or what, but the pattern was off. Plus, I was getting tired, so I was speeding through the hemming. I can't speed--I'm not accurate enough. But, at any rate, I finished! Here's the before and after: Much Better, don't you think?

Popular posts from this blog 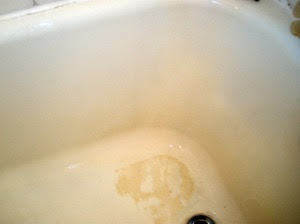 If I had to choose one thing I hate about my apartment, the bathroom would be up there. It's fugly. Okay, it's not that bad, but it has a lot that could be changed. Oh, like the cracked tiles and the tub where all the enamel has worn off and a huge area of yellowed disgusting adhesive on the tub where an adhesive tub mat once was. Add to that dried and cracked caulk, and the whole thing is a nightmare. I can clean until I'm blue in the face, and it's still disgusting. Examine:


Keep in mind this is AFTER I just cleaned with an abrasive cleanser.


Yes, gross. I mentioned the caulk (which was not in great shape when I moved in 5 years ago) to my landlord once, but you know, given that I have decent rent, I hate to push things too much for minor problems. So, I've thought about doing it myself. My first and only other experience recaulking a tub was in 2000 when I lived in a group house. The landlady there was more or less a slumlord, so having her do it was out of the q…
Read more 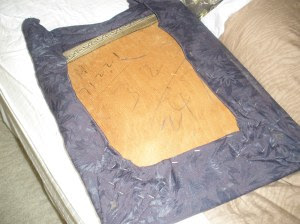 Saturday, I had one of those days where, because I had nothing concrete planned, and so many options, I had difficulty committing to anything. This led me to actually complete a project I've been meaning to do for awhile--recovering the seat of a chair. After completing it, it's rather embarrassing how long it's taken me.  If you've never done this, it's really easy.  The subject in question was a chair I acquired at an estate sale in my hometown before leaving for the big city (or, the suburbs of Bethesda, MD) and my first apartment.  It's a cute Gustavian sort of chair that serves so little purpose in my bedroom other than holding discarded clothing. But, that is neither here nor there. At some point, I am planning to use it as a desk chair (which I did at one point when I had a desk). I had originally recovered it in a nice purple jacquard. However, I was tired of that. I decided to recover with leftover fabric from my shelf project.
Here is the chair seat an…
Read more 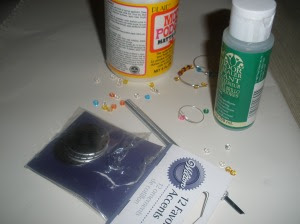 As I said in another post, this Christmas, I made wine glass id tags for my wine club, AOC. I had the idea because everyone was constantly wandering around pointing at random glasses and saying "Is that one mine? Is THAT mine?" So, it just made sense. But, like many of my ideas, I kind of had something in my head and no real plan. No matter.

I made sets of charms for a few friends awhile back, so I had an idea of what to do for the thingy that goes around the stem. I did not, however, have a concrete plan of how to personalize. I explored letter charms, letter beads, and metal tags and other tags from Etsy. I didn't get any of those and thought I'd be better off seeing things in person, which brought me to Michaels over Thanksgiving weekend.

As it turned out, Michaels had a crappy selection. I dragged my poor mother around that store to every department, and I know she was getting more than a little frustrated with me. (But she's used to it!) The jewelry departmen…
Read more